Looking for some good video games to get this winter?  Here is a list of 10 games I thought were great for this year (in no particular order).  Note: I haven't posted reviews for some of the games on the list, but I can do that later as I get the extra time.  Note: this entry is too long to do in one post, so I will have to break it down into several posts 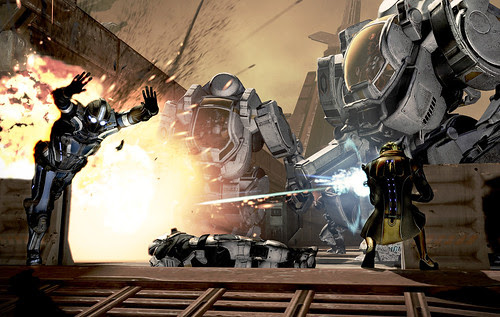 Mass Effect 3 is currently the epic finale to the Mass Effect franchise.  This game was awesome.  In Mass Effect 3, the Reapers arrive and wreak havoc across the galaxy (makes you feel like you are in a War of the Worlds type of movie in a way) and it is up to Commander Shepard, who was supposedly suspended as captain and detained on earth in the aftermath of the events of Mass Effect 2 (probably due to both his time working for Cerberus, who later become his enemies by the way, as well as the incident in "the arrival" expansion pack where Shepard was forced to destroy a relay station when the reapers were about to invade a Batarian colony), to unite the galaxy in their efforts to stop the reapers from brining about Armageddon to the galaxy (they basically want to destroy the universe and wipe out the human race along with other races).  This game is definitely one of the kind and I definitely like the "choose your own adventure" style system that the series offers where you can determine how the game plays out and ends, by the way, this game is best played in conjunction to both Mass Effect 1 and Mass Effect 2 since not only do they give you a good backstory to what is going on prior to Mass Effect 3, but the series is revolutionary in that what happens in the first 2 games determines how Mass Effect 3 starts out and ultimately ends (such as who survives the events of Mass Effects 1 and 2 and who dies, as well as how people perceive shepard as well as romances Shepard gains in the course of the story).  While the ending could have been better, Mass Effect is definitely a thrill ride you will not want to miss (especially if you are into science fiction style games and movies like Star Wars, Battlestar Galactica and Star Trek).   By the way, there are multiple ways this game can end and it is possible for Shepard to lose to the reapers.  He can also get into romantic relationships with certain crew members too (my guy for example, dated Tali in his tenure, though I have heard that both Miranda and Ashley are popular girlfriends for Shepard too).

Is dragon slaying your style?  Elder Scrolls Skyrim has lots of it.  It is essentially the latest game in the Elder Scrolls Franchise and is the official sequel to Oblivion.  You assume the role of a hero (who was almost got beheaded by the Imperial Legion that has taken control of Skyrim before dragons start attacking) who later becomes known as a "dragon born", who is essentially a hero that can not only defeat dragons, but he can also gain special powers and abilities whenever he defeats a dragon (much like how Mega Man can steal the abilities and weapons of robot masters he defeats throughout the series).  Like Morrowind and Oblivion before it, Skyrim offers a huge open ended gameplay system and a huge map you can explore.  Lots of towns and villiages to visit and explore, quests to complete, factions that you can join and be a part of, abilities that you can gain, and more.  This game will likely take several months to complete (unless if you have lots of free time on your hands) but it is definitely worth it.  You can build just about any type of character (I played as a Khajit that I named after Tiger Woods) and make him a soldier, fighter, thief, mage or rogue.  There are plenty of factions that you can join too, such as the mages guild in winterhold (which makes you feel like you are in a harry potter movie in a way), the companions guild in White Run where the dragon born can gain the ability to turn into a werewolf and easily defeat enemies that might otherwise be difficult to defeat, the thieves guild inn Riften (btw, you can get access to the skeleton key which makes it so that you can break into almost any lock  in the game without having to worry about wasting lockpicks and can even give you free lockpicking training skills too), as well as the Dark Brotherhood too (which is essentially the assasins guild in the game). You can also get involved with the civil war between the imperial legion (even though they tried to kill your character at the beginning of the game) and the Storm Cloaks too.  In the main story line, the dragon born sets out to eliminate the dragon threat and defeat the evil Alduin who is an evil dragon that wants to destroy the world.  Definitely a good game to get, especially if you are into RPGs.


Quick question for you all.  Are any of you fans of the Castlevania series?  I used to not be a fan of the castlevania games, but since the SNES era of Castlevania I have been a longtime fan of the franchise and have played though many different installments of the series, including Symphony of the Night, Castlevanis 64, Lamment of Innocents and most recently, Order of Ecclesia.  Fans of the Castlevania games (especially symphony of the night era Castlevania games such as SOTN, Dawn of Sorrows, Portrait of Ruin, etc) will likely get a kick out of Harmony of Despair.  This game seems to the the direct sequel to the Gameboy DS Castlvania games (namely Dawn of Sorrows, Portrait of Ruin and Order of Ecclesia) and even comes with an arcade style feel where you go through remixed levels of the previous games (with lots of content borrowed from DOS, POR, AND OOE) fighting through hordes of ghosts, skeletons, monsters and other signature Halloween-style enemies that you would find in a typical Castlevania game.  Initially you can play either as Shanoa, Alucard, Johnathan (one of the few whip users in the game), Soma and Charlotte, though there are expansion packs that let you play as other characters such as Julius Belmont, Richter (from Dracula X Chronicles and POR), Maria (she plays much like the version from Portrait of Ruin), and even Simon Belmont (for any of you who are into the NES era style Castlevania games).  There are also 6 huge levels that you can play through, though if that seems to be too short, you can also download 4 more levels, including the pyramid level from POR, 2 maps from SOTN, a remixed level from Castlevania 1 and 3 (even has a remixed version of Vampire Killer playing in the background), as well as a level from Legend of Fuma (seems to be a spin off from the castlevania series).  By the way, if you don't like playing alone, you can also play the game on Xbox live and play with up to 8 other players on cooperative mode too.  It is also worth mentioning that the evil Count Dracula makes a return in the game (not all of the newer Castlevania games seems to have Dracula) in a 3 part final boss battle.