In my history of playing video games, I have stumbled across several game villians you might like.  Note: this post is too long to do in one entry, so I will break it up into 2 posts.

Bowser is definately the first of his kind, and is the main antagonist of the Super Mario Bros series.  Time and time again, Bower kidaps Princess Peach and try to conquer the mushroom Kingdom.  Of course Mario and Luigi remain thorns in his side and constantly thwart his plans. 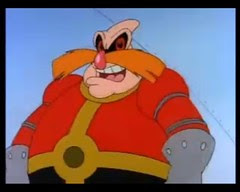 Dr Robotnik (aka Dr Eggman) is the evil mad scientist from the Sonic the Hegehog series and is always on a quest to defeat Sonic and his pals, conquer the world and turn everyone into robots.  Of course, Dr Robotnik is not smart enough to defeat Sonic and his sidekicks (Tails, Knuckles, etc), who remain foils to his evil plans.  In some of the newer games, Dr Robotnik has even found himself to being a pawn in a much larger scheme of things (like in Sonic the Hedgehog 2006, where the real bad guy is actually Mephiles, who is an evil clone of Shadow the Hedgehog that wants to revive Solaris and destroy time itself).

If you have played any of the Metal Slug games (with the exception of Metal Slug 5), you are probably familiar with this Saddam Hussein look-alike.  Morden is the main antagonist in the Metal Slug series and is always forming coup de' tiats in hopes of forming a global dictatorship and even commands his own armies as well as noteworthy cronies (like Allen, who reminds me of an evil version of Mr T that you encounter in some of thegames).  Of course, Marco and his allies are always ready to take on Morden and his men, even if it means going through multiple lives to stop him (the games play like the contra series and one hit kills your characters, so unless if you are very good at these games, you will probably die alot playing through the missions, especially the latter missions in the games as they get progressively harder as you play through them, especially the final missions in the games).  By the way, Morden is not always the brightest figure in the video game universe as he tends to form unholy alliances with space aliense (and other entities) who end up abducting him and even abusing him in the end (as is the case on Metal Slug 3), thus making Morden more as a pawn in many of the games (even in Metal Slug 4, you fight a whole new villianous business man as a final boss, with Morden only being a regular boss in level 3) and forcing Morden and his men to form alliances with the heroes (which usually dissolves by the time the sequel comes). By the way, of all of the battles I've played against Morden, my favorite is probably in Metal Slug XX, in that game, Morden is officially the main villian again and the final boss fights against him in that game are very epic (which is pretty much an 8 part battle, including the fight in the "portal room", as well as the multi-tiered final battle at the end) where you fight him in this huge tentacled space ship machine (not sure what it is called).

4. Count Dracula from the Castlevania Series


Count Dracula is the evil dark lord that serves as the evil genious for the Castlevania series (though some of the newer Castlevania games have a new villian, as was the case in Castlevania Lords of Shadow, where you will actually fight Satan himself as the final boss in the game).  Dracula is the bloodthirsty vampire that plots to bring about an everlasting dark kingdom upon the world (presumably under the guise of Satan himself) and has the ability to come back to life every 100 years (sometimes even in a shorter period of time if somone decides to resurrect him, such as Shaft in Symphonhy of the Night).  Of course, Dracula's nemesis is the whole Belmont clan (starting with Leon Belmont, and later Trevor, Richter, Simon, and other Belmonts, spanning many generations) and Dracula and his minions are no match for the Belmonts' vampire whip and holy powers, usually dooming Dracula back to the underworld each time (only for him to come back to life once again sometime later).  By the way, which Dracula battle is your favorite?  I think mine is the one from Castlevania Curse of Darkness.

Dr Wily is Mega Man's nemisis in the original Mega Man series.  Dr Wily is an evil scientist that wants to take over the world and creates hordes of robots and robot masters aimed at defeating Mega Man (who remains a foil to his schemes throughout the series) as well as do his bidding.  In some games, Wily has even tried to frame others to cover up his schemes (like Dr Light in Mega Man 9, Protoman in Mega Man 5, as well as Cossack in Mega Man 4), though his true colors are always revealed near the end of the games (before the Dr Wily levels).  Also, while Dr Wily does not seem to exist in the Mega Man X series, he does have a successor, namely Sigma (who is just as evil as Dr Wily was in the original series).  Plus he was the one who created Zero (Mega Man's side kick throughout the Mega Man series) with the idea that he wold become Wily's successor and to defeat Mega Man X, though after a fateful battle with Sigma in a scene from Mega Man X4 (before Sigma became evil), Zero became a hero and later an ally of Mega Man X, and has yet to turn maverick once again, even despite attempts from Dr Wily to goad Zero to kill Mega man in is dreams in Mega Man X4 (if you play as Zero in Mega Man X4, and watch the opening clip scene, you will see a video of what looks like Dr Wily appearing to Zero in a dream, ordering him to kill X), as well as attempts by Sigma to corrupt Zero (especially in Mega Man X5).  By the way, like the original series, the Mega Man X series has yet to reach a conclusion, so it is not clear how the story will unfold.  Does Zero betray Mega Man?  Does Dr Wily make an official apperarence in the X series (either as a person or a ghost)?  Who becomes Sigma's successor (he seems to have been permanently defeated in X8 from what I have seen)?  We probably won't know until a future sequel (and no I don't work for Capcom and so I wouldn't know, though how the story plays out is open to speculation at this time of course).

Stay tuned for part 2.  By the way feel free to share this post with others.
Posted by Ryan Jones at 1:57 PM No comments:

Posted by Ryan Jones at 9:43 AM No comments:

Now that I have beaten Scott Pilgrim vs the World for the second time (this time playing as "Kim"), I started playing through Metal Slug Anthology.  That game is pretty fun too.  It is a shoot em' up game that is alot like contra with obvious differences and features a villian named, Morden, who is pretty much a Saddam Hussein look-alike.

Here is a trailer I found on youtube that shows off the game:


Information:
I have already beaten the Metal Slugs 1-3 since I started playing the game and will play through Metal Slug 4 when I get the time to do so.  Personally, I find the Metal Slug series to be pretty fun with all of the shoot em up action, comedic themes, boss fights and other stuff.   By the way, I decided to play through the game with unlimited continues on since I am not ready to do the game under the other mode yet.  So far, my favorite game in the series is probably Metal Slug 3.  That one is epic.  I got the game for the playstation 2 by the way.

Tips and tricks in the metal slug series:
- consider doing the game 2 player.  The games get progressively harder as you play through them (especially on the final mission) and playing the game on "2 player mode" can make things a little easier for you.
- If it is your first time through or you are a casual gamer, you might want to consider leaving "unlimited continues" on.  A nice thing about Metal Slug Anthology is that not only can you adjust the difficulty level, you can also decide whether you want unlimited continues or limited continues.  Obviously, if you find the game to be too easy, you can always turn off unlimited contines (it is on by default by the way) for a little challenge.  Otherwise, if you find yourself dying alot (especially in the later missions), unlimited continues can be good to have, especially if you are the type that is likely to break your favorite controller when you get game over.
- Be sure to use your grenades and bombs when you are in hairy situations as well as when going up against tough enemies (like boss fights, aliens, tanks, etc).
- be sure to take advantage of the vehicles you can use in the games as they not only give you more fire power, but you can avoid dying as long as you have them.
- When using the vehicles in the game, if you encounter situations where you are likely to lose them, you can always get out of the vehicle and fight the enemies that way.

Want metal slug anthology?  Be sure to take advantage of these links from Amazon.com below.  Commissions will be used to cover the costs of running this site (having a website is not free you know).

Posted by Ryan Jones at 9:38 AM No comments:

an acorn is a chav
Posted by Ryan Jones at 10:22 PM No comments: