Hey everyone, just fyi, I decided to start a new Video Game Videos blog.  It will be a part of my website at http://www.xboxfreak.ws/ and has a growing collection of game play videos, trailers, and othe videos relating to video games.  You can see my new blog at http://www.xboxfreak.ws/gamevideosblog.  I will still post to this blog, of course, but for now on video game videos will usually go in that blog.  Of course if you have videos you like to share, I'd be happy to post them.
Posted by Ryan Jones at 11:46 PM No comments:

Do you ever get the feelings of familarity when playing video games (where things seem to repeat themselves)?  You are not alone.  In this blogpost, I will talk about at least 10 deja vu moments that I have encountered as a gamer.

#1- Bowser boss fights in Super Mario Bros 1 - to demonstrate the Bowser fights, here is a youtube video I found:


For the first deja vu moment, we go all the way back to the first Super Mario Bros game.  This game launched the Super Mario bros series as we know it today and is perhaps one of the first games to have boss battles in them (can't think of any games prior to SMB1 that have boss fights).  Anyways, when you fight Bowser at the end of the dungeon levels (the 4th level in each world), the boss fights are always the same.  Bowser (who is usually an imposted until world 8) is on this draw bridge, spewing fire balls at Mario and Luigi, and there are 2 ways you can beat bowser: 1) getting past him and touching the axe icon at the end of the bridge or 2) shooting fireballs with him (assuming you are able to keep the fireball power up for the whole dungeon) until he dies.  Of course, you will fight these exact same "boss battles" in all 8 worlds.  The only things that change are the dungeon layout and some of bowser's attack patterns (such as shooting hammers at Mario and Luigi in worlds 6-8).  Another deja vu moment is that prior to world 8, "Bowser" turns out to be an imposter (such as a goomba) and Mario/Luigi encounters Toad, who tells him that she is in another world.

# 2- Count Dracula's first form in most of the Castlevania games -
Here is a youtube video about a boss fight against Dracula on Castlevania Dracula X. This boss fight is the classic and perhaps one of my favorites.

If you have played most of the games in the Castlevania series, you would know that the main villian in the series is the Count Dracula, who is the evil vampire that wants to destroy the human race (only to be stopped by the Belmont clan and its allies).  Anyways, at the end of the game where you fight Dracula, usually you fight him in at least 2 forms (though not always), and while the developers usually get creative about Dracula's demonic form (such as the Gargoyle in Castlevania Dracula X), the first battle with Dracula is almost always the same.  In his first battle, the evil lord teleports around the room and hurling fireballs and other projectiles at he hero (sometimes he also tries to suck the hero's blood as well in some games, such as Castlevania 64 when you fight the imposter version of Dracula) and you usually get a short period of time to attack him before he teleports again, and the battles play out this way until you defeat him, after which he usually transforms into his monsterous form that you also have to defeat. Of course, this type of boss fight with dracula can be found just about any Castlevania games, with two exceptions being Curse of Darkness (I thought that Dracula was much more animated in that game doing more than just teleporting around the room and attacking), as well as Symphony of the Night, when you go up against Dracula as Alucard (the traditional Dracula boss fight actually takes place when you fight him as Richter towards the beginning of the game, and when you go up against him as Alucard at the end of the game.

Usually, once you beat his first form, he turns into a hideous beast that you also have to defeat, though in some of the games, that is the only form you fight as is the case in Castlevania 2: Simon's Quest and Castlevania 4 (I thought that one was a bit anti-climatic when I played that game given the extra bosses you fight in the "room of close associates" that you go through towards the end of the game where you fight Death, Gaibon and Slorga). Also, in Castlevania 64, you will actually do the traditional Dracula fight twice (first with the imposter Dracula and later with the real Dracula, who is actually the boy, Malus if you remember that game of course). Even in some of the newer Castlevania games, where there is a new villian in place of Dracula (such as Walter in Lamment of Innocence), the new guy often mimics dracula as he too does the teleportation moves while attacking as well.

I was watching youtube videos and decided to watch a speed run on Mega Man 9. I was playing the Mega Man Anniversary collection earlier today (did Mega Man 3) and thinking about getting Mega Mans 9 and 10 at some point.

Posted by Ryan Jones at 9:54 PM No comments:

Here is an interesting video game preview I stumbled across on on youtube, posted by IGNentertainment about the upcoming X-men arcade game

Commentary about this video:

If you have been to various arcade establishments, I am sure you have come across the X-men arcade game. Now, it appears that Konami is planning to do a whole remake of the game for consoles (possibly Xbox live, Nintendo Wii Ware, etc). This game is sure to rival the hit, Castle Crashers.

Watch a commentary about the New Golden Eye 007 game, posted by IGN.

It appears this game will be the official remake for the popular Golden Eye game from the Nintendo 64 with some completely new elements, such as the current Bond (Daniel Craig). This game could become a potiential rival to games like Modern Warfare 2, Halo Reach, etc.

Posted by Ryan Jones at 2:50 PM No comments: 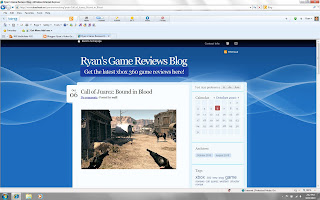 You can check out my new blog at:
http://www.xboxfreak.ws/gamereviewsblog?post=Call_of_Juarez:_Bound_in_Blood
Posted by Ryan Jones at 2:43 PM No comments: