Now that I have beaten Sonic the Hedgehog for the Xbox 360, I decided to resume my focus on Mass Effect (will also do Mass Effect 2 after beating ME1).  Just did the Virmire planet and will soon do the final missions.  My guy is half paragon and half renegade.  BTW, want to see a youtube video about Mass Effect, check it out here: 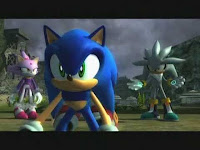 I've been playing through Sonic the Hedgehog 2006 (the next generation version featuring Sonic, Silver and Shadow) and just finished the game yesterday.  In this blog post, I will share with you my thoughts about the game.
Story
The game takes place sometime after the events of Sonic Adventure 2, Sonic Heroes and Shadow the Hedgehog.  Set in a town named Soliana (which seems to based on a town in Italy, probably Venice), villiagers lead by Princess Elise take part in a festival honoring the Eternal Flames when she gets a grim vision of a dark entity called Iblis razing the city (which seems to forshadow events later in the game).  Soon afterwards, Dr Eggman (also known as Robotnik) decides to invade Soleanna and kidnap the Princess.  It turns out that Dr Robotnik is at it again and wants to revive an entity called Solaris, which is Soleanna's pagan Sun god, an entity that has the ability to manipulate time itself, changing the past, present and future.  Eggman wants to revive Solaris and use it in his plans for world domination and Sonic and his gang is back and plans to foil Eggman's plans.  Despite Eggman's ambitions, after a mishap about 10 years prior to the story, two demonic entities appear on the scene, namely Mephiles (an evil figure that takes on the form as an evil clone of Shadow the Hedgehog) and Ibis (a firey monster that is known to raze towns and cities it visits as you will see in the Crisis City level). Mephiles and Iblis are two entities that can form the infamous Solaris when fused together with the power of chaos emerads and have no intention of cooperating with Dr Eggman.  Mephiles actually becomes the main villian in the game and wants to not only bring about Armageddon to Soleanna (and the rest of Sonic's universe), but he also wants to become Solaris and destroy time itself (it is hard to really explain, but you would have to play through the game to learn the full plot).   Meanwhile, Shadow the Hedgehog becomes an ally of Sonic and a new hedgehog is introduced, namely Silver, who is from the future and is made to believe Sonic is the enemy (remindes me of Knuckles a bit in Sonic 3, where Eggman tricks him into thinking that Sonic is the enemy).  It is up to Sonic, Shadow, and Silver to 1) foil Eggman's plans, 2) defeat Mephiles and Iblis, and 3) to ultimately stop the resurrection of Solaris before he can destroy Sonic's universe. 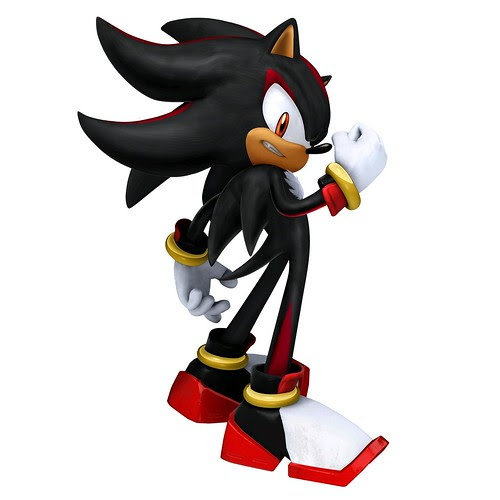 Shadow is back and is aligned with Sonic this time around and is joined by Rouge the bat and a robot named, Omega 123.  Back in Sonic Adventure 2, Shadow was a villian and was in leage with Eggman.  However, since then his relationship with Eggman has deteriorated significantly and has repented of his villianous ways.  In Sonic 2006, he and Rouge had stolen a special wand called, the Scepter of Darkness (a mysterious object that has sealed away Mephiles after the Soleanna Disaster that took place 10 years prior to when the game begins) and was being pursued by Dr Eggman's robots.  After a mishap that takes place when Robotnik tries to take the Scepter of Darkness from Rogue, the Scepter of Darkeness breaks and inadvertantly releases Mephiles, an evil entity that clones himself in the image of Shadow and wants to not only destroy the world, but also wants to destroy time itself.  Mephiles soon becomes Shadow's nemesis and it is up to Shadow to stop Mephiles in his ambition to destroy the world as Shadow knows it.  In addition, Shadow is a part of a government organization called, GUN and some of the levels in the game will be GUN themed (such as the first level in the game, where he has to infiltrate Robotnik's artic base).  Shadow's abilities are similar to that of Sonic, but also includes: the ability to do combos when he initiates homing attacks, the ability to drive buggies, motorcycles and other vehicles in the game, shooting energy spears at enemies (which stuns them), as well as a chaos mode ability, where Shadow's attacks gets stronger as well as the availability of extra moves (such as an explosion attack, where Shadow sends out a shockwave that kills or damages enemies within a short radius around Shadow).

Ah, don't you remember the good ol' days in the Sonic the Hedgehog series when Sonic and Amy were the only hedgehogs known?  Then came Sonic Adventure 2 and Shadow was introduced.  Now, in Sonic 2006, a new hedgehog is introduced, named Silver and now there are now 4 hedgehogs known in the series (namely Sonic, Amy, Shadow, and Silver).  It appears that Silver is from the future in the game (approximately 200 years or so into the future), in a post Apocalyptic Soleanna, which was destroyed by Iblis, a fiery monster that can destroy entrie cities by starting infernos and was presumably brought about by Dr Robotnik after he kidnaps Princess Elise and sends Sonic and gang into the future via a time rift portal.  You would have to play through the game to the the full details about Iblis's story, but anyways, Silver is out to avenge the destroyed world and wants to destroy Iblis and find out who caused Iblis to form (known as the "Iblis Trigger").  After being tricked by Mephiles into thinking that Sonic is the Iblis Trigger, he sets out to kill Sonic at the advice of Mephiles (probably in an attempt to cover up his true colors) and is joined by a cat named Blaze as well as Amy Rose (though naturally, she does betray Silver when she learns that he wants to kill Sonic).  His main mission is to stop the Iblis Trigger (is it really Sonic?  I won't spoil the true identity of the "Iblis Trigger") and to defeat and seal Iblis.  Silver's moves are alot different from Sonic and Shadow (he can't do homing attacks on enemies for example) and has the power to levitate and throw objects and some enemies through a move called telekines, glide (though he can't glide as long as Knuckles can), stun and throw some enemies, as well as hover. 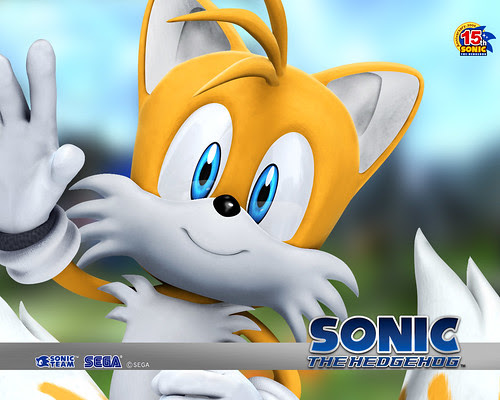 Tails is a young two tailed fox that has been Sonic's #1 side kick since Sonic the Hedgehog 2 (after being rescued from Eggman in the Game Gear version of Sonic 2).  Tails probably Sonic's closest companion and has the ability to fly for limited periods of time (allowing him to get to places out of reach for Sonic).  Tails is younger than Sonic and even envy's Sonic's abilties at times (he wishes he can move as fast as Sonic can), though his ability to fly makes up for his slower speed.  Tails is a mechanical genius and can easily pilot planes, mechs and other vehicles throughout the series.  Unlike the previous installments of the 3D Sonic games, Tails does have a lesser role (he functions more as a NPC most of the time) though you will play as him on certain levels occasionally in Sonic's mode (such as in the Wave Ocean level, where Tails has to stop an orca whale from eating Sonic by hitting a special switch to open a gate that lets Sonic to break free of the orca).  Unlike previous Sonic games, it appears that Tails no longer has the ability to morph into a sawlike ball as he does in previous games nor the ability to wack enemies with his tails.  Instead, he will throw ring bombs at enemies (though he can divebomb enemies with ring bombs). 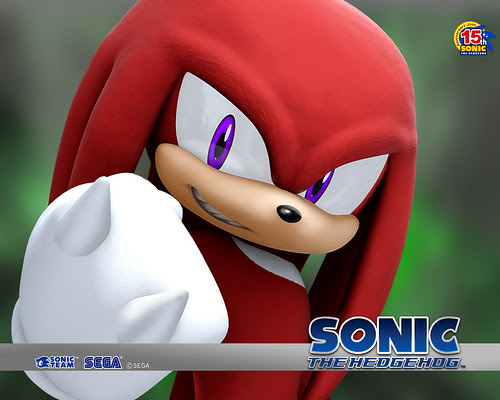 Knuckles is back and is another support character in Sonic's story.  At one time, Sonic and Knuckles were enemies (play Sonic the Hedgehog 3 as well as Sonic and Knuckles to see Knuckles' back story), but since Sonic Adventure 1, he became another sidekick of Sonic (though it appears that he can still be tricked by Eggman as was the case in Sonic Adventure 1, where Eggman tricked Knuckles into thinking that Sonic was after the Master Emerald).  Anyways, like Tails, Knuckles does play a lesser role in the game (though there are some levels where you will play as him, such as in Dr Robotnik's Aquatic base level, which is the last level in Sonic's portion of the game).  Knuckles can punch enemies, climb walls, do homing attacks on enemies, as well as glide.  BTW, unlike Sonic Adventures 1 and 2, he does not have the missions where he has to collect Chaos Emerald fragments.

Posted a new video about Amy falling in quicksand in the Dusty Desert level. enjoy